The Top 5 Most Badass Women in Shakespeare

I've heard over and over again (even just this week) that there are "no good roles for women in Shakespeare". I'll be the first to say that there are too few of them (about one female for every eight males), but the roles that exist are wonderfully rich and interesting characters. Of course, I am ALL FOR casting women in men's roles whenever possible, but I think there are some ladies in the canon that don't get enough recognition for how totally tough, smart, and all-around awesome they are. With that in mind, I'd love to shed some light on my personal list of the top five most badass women in Shakespeare. 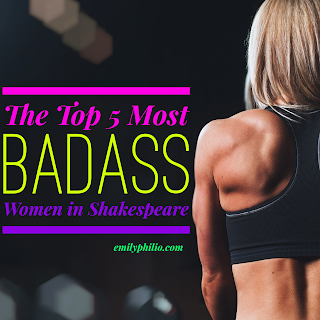 Perhaps the most well-known of the ladies I've chosen, Mrs. Mackers certainly earns her "spot" on the list (ba-dum ching). She conspires with her husband to murder the King of Scotland while he's a guest in her home, and isn't too squeamish to get her hands dirty during the assassination. When Macbeth has second thoughts, she is able to convince him to kill King Duncan and seize the throne for himself - and let's be real, being the Queen of Scotland is pretty enticing.

Macbeth: If we should fail?
Lady Macbeth: We fail?
But screw your courage to the sticking place
And we'll not fail.

Lady M is ambitious and has a stronger resolve than her husband, making her a dream role for many ladies!

You may not think Cordelia is a badass because hardly anyone plays her that way, but hear me out: Cordelia is so much more than a young princess/queen in a pretty dress. She won't lie to her father to inherit a bigger piece of the kingdom (like her sisters do), and she is disinherited for it. She lucks out, because the King of France decides he wants to marry her anyway. As she leaves the first scene to go to France with her soon-to-be husband, she leaves these words for her conniving sisters:

Cordelia: Time shall unfold what plighted cunning hides,
Who covers faults, at last with shame derides.

In Act IV, when all hope seems lost, and Lear is facing senility and certain defeat, Cordelia comes back to Britain from France LEADING A FREAKING ARMY and waging war against her sisters. Even though she loses and is captured, she makes amends with Lear and goes to her death gracefully. She may not be sadistically blinding old men, like her sister, Regan, but Cordelia is a noble badass, who is caring and forgiving, and totally deserving of recognition.

When the King of Sicilia loses his mind, thinking that his wife, Hermione, has been cheating on him with his BFF Polixenes, and is pregnant with Polixenes' baby, no one can convince him otherwise. When Hermione gives birth to a daughter in prison, Paulina takes the infant princess to King Leontes in an attempt to get him to come to his senses, at risk to her own life:

Leontes: I'll have thee burnt.
Paulina: I care not;
It is an heretic that makes the fire,
Not she that burns in't.

Leontes ends up having his infant daughter abandoned in a distant land; perhaps more cruel than his initial choice to kill the baby immediately. It's only after Leontes ignores the Oracle's ruling of Hermione's innocence (which he ordered and said he would honor), and the instant reports of the death of his young son and wife that he regains his senses and repents (with plenty of I told you so's from Paulina). Her fearlessness earns her a vital position: Leontes takes Paulina as his most trusted advisor for the next 16 years, to the end of the play, and probably beyond!

You don't want to mess with the Queen of the Goths. A prisoner of war in a son-killing competition with Titus Andronicus, she uses her cougar-like sex appeal to marry Saturninus, the new emperor of Rome. Saturninus is easily swayed by Tamora's *ahem* charms, and doesn't even notice that she's continuing an affair with Aaron the Moor. When Tamora and her two sons run into Titus' daughter, Lavinia, and Bassianus, Emperor Saturninus' brother, in the woods, they murder Bassianus and frame two of Titus' sons for it. Tamora's two sons are about to rape Lavinia, who asks Tamora to kill her rather than suffer that fate, to which Tamora replies:
Tamora: Let them sacrifice their lust on thee.

Cold as ICE. Things get even worse for Lavinia, who has her hands and tongue cut off to keep her from naming names. When Tamora gives birth to a son who has a bit too much melanin to be the biological son of the Emperor, she instructs that the baby should be killed in order to keep her affair with Aaron a secret. This ruthless woman will stop at nothing to maintain her power and to destroy Titus and his family.

If you know who Margaret is, I'll bet you aren't surprised to see her at the top of this list. If you don't know who she is, get ready to meet THE QUEEN.

Margaret is the wife of King Henry VI. She's a French nobleman's daughter, who brings no dowry (a problem for England, whose treasury could really use some help at this point). She falls in love with Suffolk, the man who brings her to meet her husband, and she finds her husband to be unimpressive. A clever and proud woman, she flexes muscle at court by undoing anyone who crosses her. She sets up the high-and-mighty Duchess Eleanor of Gloucester in an elaborate scheme so that she'll be convicted of witchcraft. She openly mourns the death of Suffolk, who is murdered by pirates. She is a skilled general during the seemingly endless civil war, killing her main opposition, York, and his youngest son.

Her son is then murdered as she watches, and she is exiled to France, only to return and rain down curses on her foes.

Margaret is a rich and interesting character who takes on more leadership skills than her weakling husband in an attempt to maintain power in England. She is smart, tactical, confident, and commanding, and her arc from penniless girl, to warrior queen, to mournful crone over the course of four plays is an amazing transformation!

Did any of these choices surprise you? Who didn't make the list that you would have liked to see on here? Let me know in the comments!

Wanna step up your Shakespeare game?
Email shakespearecoach@gmail.com to schedule your first lesson!
Click here to get my FREE cheat sheet on the Top 5 Mistakes Actors Make in Shakespeare Auditions!
Posted by Unknown at 06:00